It's possible to dramatically increase cycling traffic in a relatively short period of time by adding cycling infrastructure. In just four years, the city of Seville increased bike traffic more than tenfold by building protected, permanent bike lanes connecting the whole city. For some places, there may be an even easier, cheaper way to foster more cycling. Although the need for bike lanes gets a lot of press, The Best Way to Promote City Riding is to add Bike Racks.

This is something almost any business owner can do for very little money without having to lobby for new laws or jump through similar hoops. (Do check your local rules, of course.)

The Coastal Washington region is especially well-positioned to benefit from this low cost, low hassle strategy for fostering more cycling. One reason to do so is in hopes of bringing in more tourism dollars with less environmental burden.

Most of the Coastal Washington region is fortunate to have a number of old-fashioned scenic highways instead of the usual limited-access freeways. This means cycling enthusiasts can readily access the region in order to visit the natural beauty and historic sites without a vehicle.

Cyclists already do so to some degree in spite of a general lack of additional supporting bike infrastructure, such as racks. I have seen groups of cyclists leaning their bikes up against walls at grocery stores and other establishments, sometimes with a guard posted because there is no means to lock them up.

What Makes for Great Bike Parking?

This page is a rewrite of something I did months ago. Some bike racks popped up locally immediately after I did the original write up, but they were not inverted U racks and they were in an ugly shade of dark brown (rather than pretty shades of light/bright blue, white, pink or beige like I was envisioning) and mostly randomly placed on street corners without cover rather than near business entrances and properly sheltered.
Some parts of western Washington get a LOT of rain. Bike racks without shelter are bike racks that won't see much use in rainy areas.
Additionally, they should be pretty, eye-catching colors so people notice that there are bike racks in the area. Brown loops sticking up out of the ground on random sidewalk corners without shelter may get mentally glossed over as water pipes or other utilities. It may not register to people as bike racks. 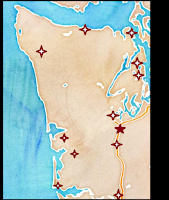